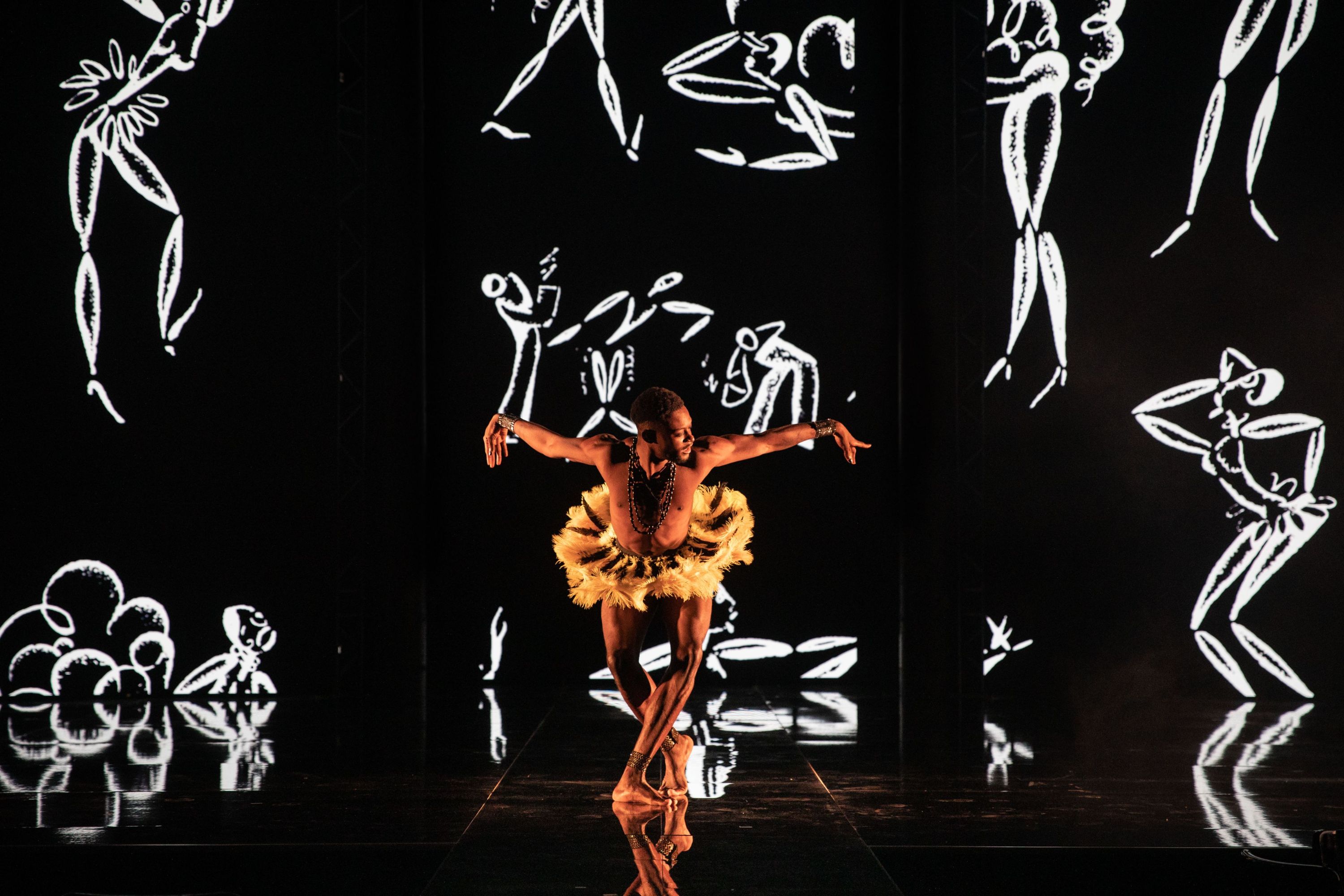 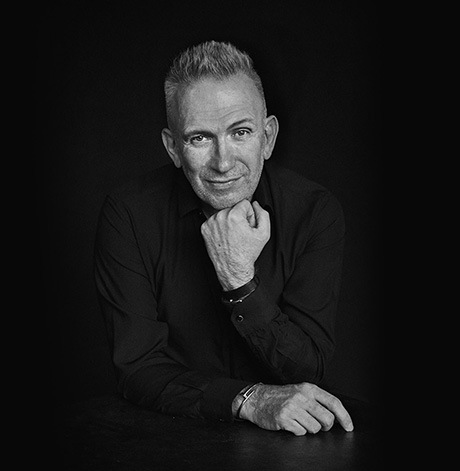 Jean Paul Gaultier was born in 1952 in a Paris suburb and has started his career with Pierre Cardin  in 1970, on the day of his 18th birthday.

After working at Esterel , Patou and again at Cardin, Gaultier decided to start his own fashion house and staged his first show in Paris in 1976. Critical and commercial success followed quickly and by the early eighties he was one of the most talked about young designers.

From the beginning of his career, Jean Paul Gaultier wanted to show that beauty has many facets and that we can find it where we least expect it like in a lowly tin can which first became a bracelet and later the packaging for his hugely successful perfume. His menswear was launched in 1984 with the “Male Object” collection and in 1997 Gaultier has realized his dream of starting an haute couture collection “Gaultier Paris”. He was also the designer for Hermes womenswear from 2004 to 2011.

Throughout his career Gaultier has worked in dance, music and the cinema. His costumes for Madonna’s Blond Ambition tour have left an indelible imprint on the popular culture. His first collaboration in the cinema was with Peter Greeneway for “The Cook, The Thief, His Wife And Her Lover” in 1989. He also designed costumes for “The City Of Lost Children” by Caro and Jeunet, “Fifth Element” by Luc Besson and has worked three times with Pedro Almodovar on “Kika”, “Bad Education” and “The Skin I Live In”. 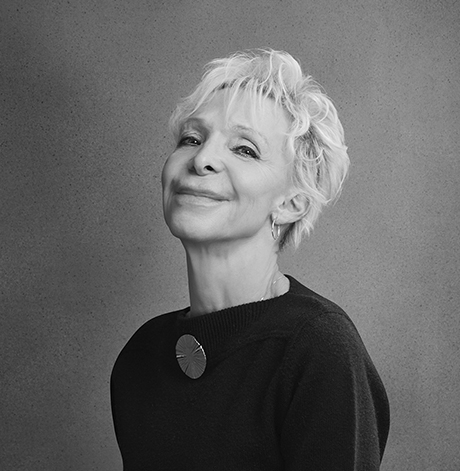 Toni Marshall was best known as an actress before she  became a film director. She directed “Pentimento” in 1990, starring Antoine de Caunes in his first feature film.

In 1993, she created her own independant production company Tabo Tabo Films, experiencing  greater freedom to produce her own films as well as young  writers and directors.

In 1999, “Venus Beauté (Institut)” was released and was a great success : more than 1.3 million tickets sold in France and international distribution in over  20 countries . It won 4 Césars including Best Director, a premiere for a woman director in the history of the Césars. The film was equally as successful when it became a television series in 2004 in co-production with Arte and the very first television series adapted from a feature film. The two seasons of the show are sold in more than thirty countries (Portugal, Romania, Croatia, Germany, Japan …).

Her final film “Number One” was released last October and tells the story of Emmanuelle Blachey, a brilliant and driven Engineer. 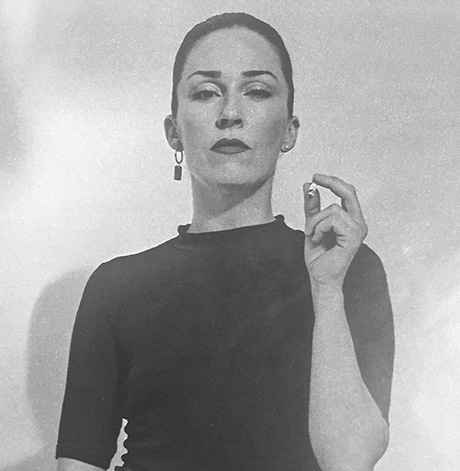 Dancer and choreographer, Marion Motin founded her “Swaggers” collective in 2009 and created her first full-length performance “In the Middle”, which has been on tour since 2014.

Meanwhile, she has danced for Sylvain Groud, in “Elles”, then for Angelin Preljocaj, in “Royaume-Uni” before setting out on an international tour alongside Madonna (“MDNA Tour 2012”).

Upon her return, a meeting with Stromae led to her choreographing his music videos and the “Racine Carrée Tour” (2013).

The following year, it was the turn of Christine and the Queens to entrust Marion with the choreography of her “Chaleur Humaine Tour” and some of her music videos (“Christine”, “No Harm Is Done”, “Jonathan”). A few months later, Marion took on the musical comedy “RESISTE” with the even greater success of Michel Berger and France Gall (2015) and signed up for visual artworks such as the “Hermès Club” in Shanghai with Jean-Paul Goude and Rocio Molina (2017).

Her choreography is essentially inspired by instinctive and natural corporeality and immediately necessary movement. 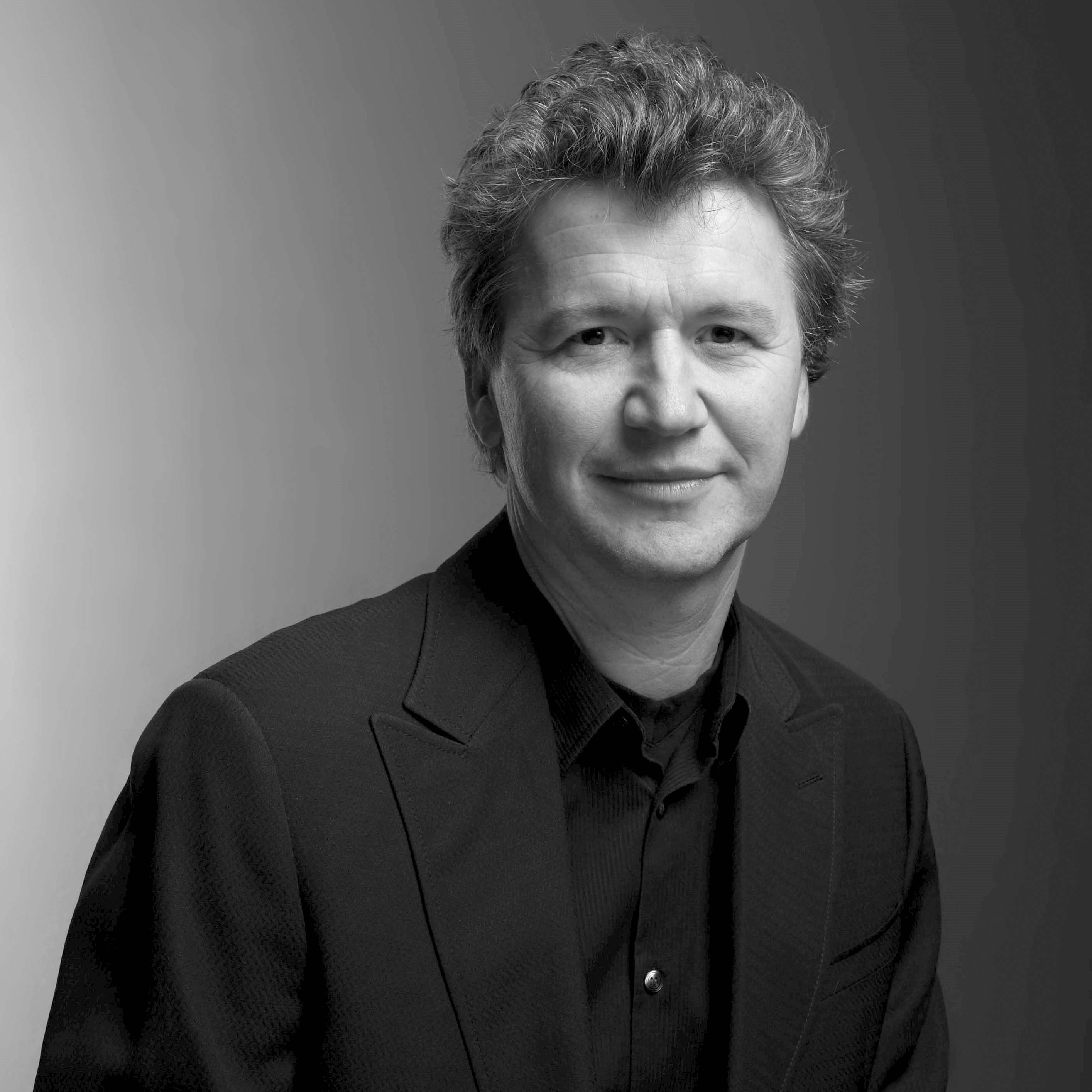 Simon began his career in New Zealand before emigrating to Australia in the 80s. He was Artistic Director of The Melbourne Theatre Company from 2000-2011. His directing credits range from new works to contemporary and Shakespearean classics to musicals to opera. He has directed works by most of the great contemporary writers, as well as the premieres of many works by leading Australian writers, including David Williamson and Joanna Murray-Smith. Simon’s musical credits include Priscilla, Queen of the Desert (which has been performed internationally for the past 16 years including the West End and Broadway), the new Australasian version of Andrew Lloyd Webber’s Love Never Dies (which was filmed by Universal, and has had seasons in Tokyo, Hamburg, and the USA), A Funny Thing Happened on the Way to the Forum, Urinetown the Musical, Cabaret, Company and two adaptations developed with Split Enz’ Tim Finn and his wife, Carolyn Burns: Ladies in Black, which won the Helpmann for Best New Australian Work and Come Rain or Come Shine based on the short story by Kazuo Ishiguro. Most recently, his production of Muriel’s Wedding toured Australia and his new production of Phantom of the Opera was performed on the Sydney Harbour stage. Simon’s opera credits include: The Turk in Italy, L’Elisir d’Amore, Falstaff, La Bohèmeand Lulu for Opera Australia, The Magic Flute and Don Giovanni for Opera New Zealand and A Midsummer Night’s Dream and Billy Budd for Hamburg State Opera. He has received seven Green Room Awards and six Helpmann Awards. 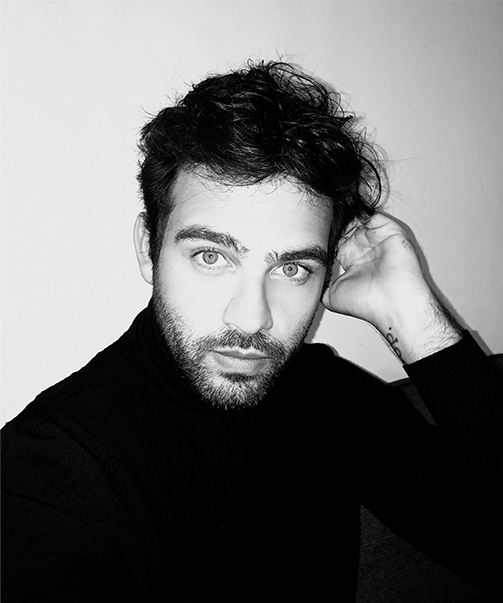 “A good spanking for pop culture!” was the slogan of the first webzine created by Raphaël Cioffi, “Spank Magazine”, which perfectly lays down the bases of its writing: it’s pop, and it’s refreshing. With a few friends, they refresh the codes of the genre to create a quirky and innovative media, a real talent pool, including their flagship illustrator: Charlotte Le Bon. Quickly noticed for their creativity, Charlotte and Raphaël joined the “Grand Journal” de Canal+ team. For a year, they created over 200 sketches for the weather, as absurd as they were delightful, amusing some of the biggest stars on the planet: Beyoncé, Rihanna, Julia Roberts, Robert de Niro … and a certain Jean-Paul Gaultier. Utterly charmed, he offered Charlotte the chance to host his next fashion show, bringing a touch of humour. This was the first time that Raphaël wrote for the designer and the understanding and complicity between the two was instant.

Meanwhile, he set his writing more to the service of the fashion industry, doing cover interviews for “L’Officiel” and collaborating with several French fashion houses (Lancel, Lolita Lempicka, Ami…). He also broadened his artistic field by managing the singer “Yanis”, whom he accompanied on his journey of development in a visually ambitious musical universe.

Yet, the author couldn’t keep away from comedy for long, as he returned to the team of his two favourite French secretaries: “Catherine and Liliane”, portrayed with true panache by Alex Lutz and Bruno Sanches. For 4 seasons, through these characters, Raphaël shares a perspective on the world which is irrefutable, poetic and funny all at once. Once more seduced by this resolutely camp humour, Jean-Paul Gaultier accepts the offer to join the two secretaries for a delectable sketch.

A few months later, Jean-Paul Gaultier presented Raphaël with a new project: to write the programmes for his fashion shows, with the irreverent and modern tone that sums both men up perfectly. The collaboration confirmed their common desire to make people laugh and to shake things up, giving Jean-Paul Gaultier the idea to combine their talents and to have him write his most delirious project yet, his display at the Folies Bergère: the Fashion Freak Show. 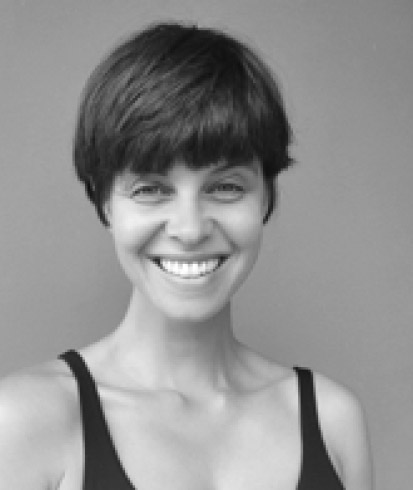 Fanny studied at the Centre des Arts Vivants Dance School in Paris. She created her first choreography piece, Dear Dolly at the Galabru Theatre in 2005. After working on many events, shows and productions in Paris and abroad, she joined the Franco Dragone Company in 2012 where she played The Dark Queen in The House of Dancing Water, from 2013-2016, choreographed by Giulano Peparini. Fanny’s journey with Fashion Freak Show began in 2018, when she worked with Marion Motin and Jean Paul Gaultier as dance captain of the show. A year later she was appointed Assistant Director of Fashion Freak Show, and has directed special guest appearances by stars such as Dita Von Teese, Catherine Ringer and Rossy de Palma. In 2019 she collaborated with the National School of Circus Arts, where she co-wrote and directed the show 3025. Fanny has given workshops for the National Institute for Young Blind People in Paris and for the artists of the Dragone Company in Macau. She recently obtained her state diploma as a contemporary dance teacher at the Centre Nationale de la Danse (CND Pantin). 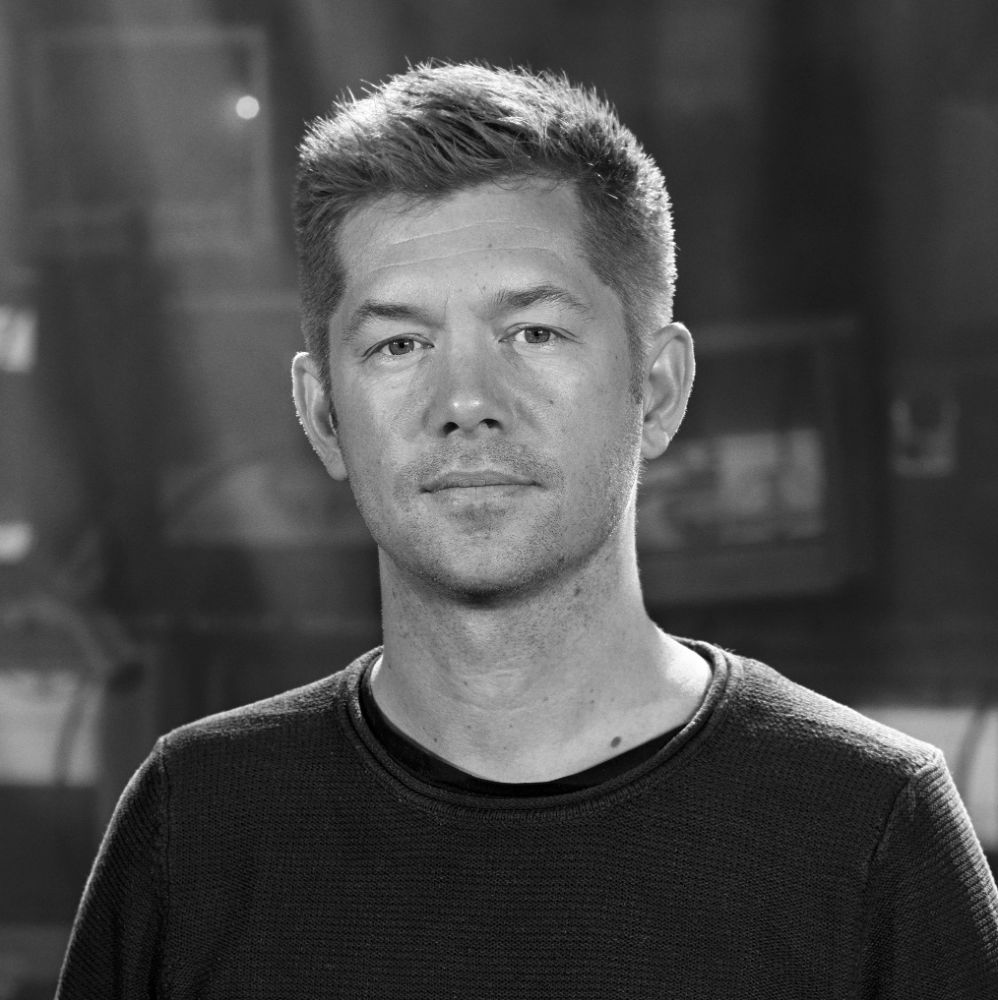 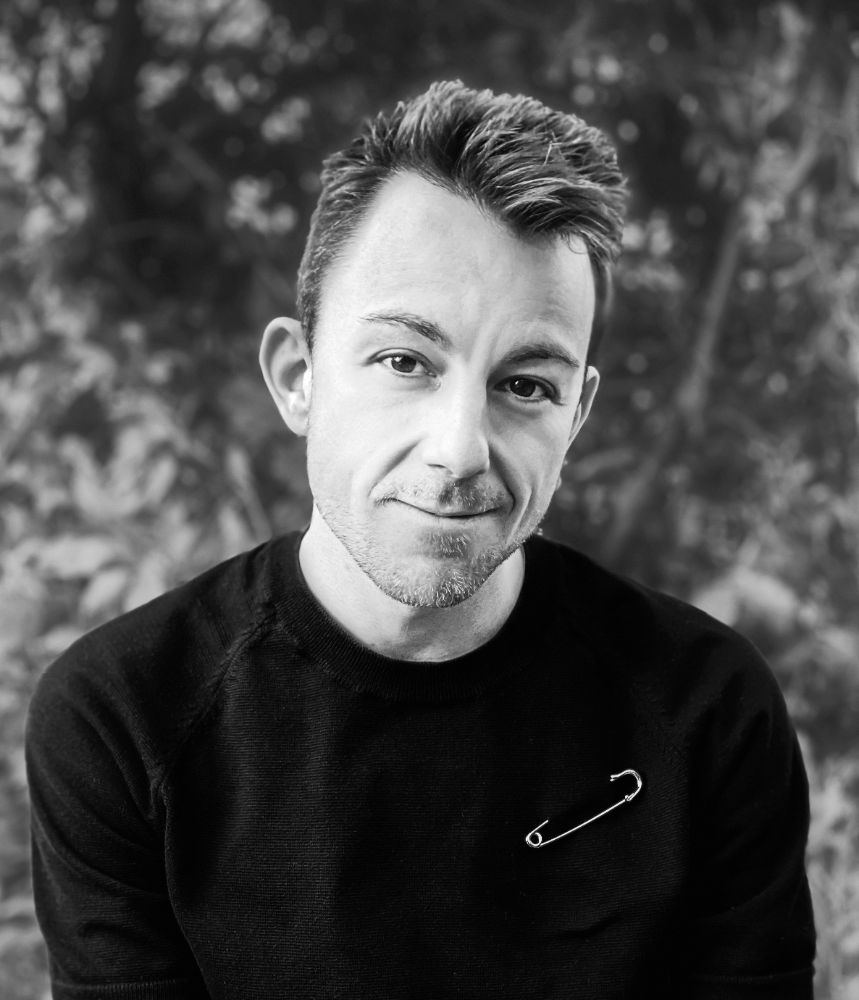 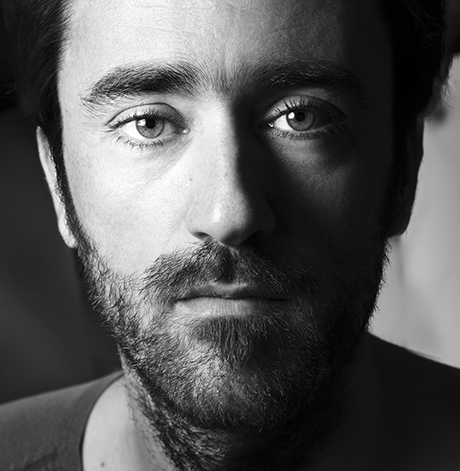 A filmmaker and producer, and co-founder of Mirio studio, Renaud Rubiano has worked with Éric Soyer and Joël Pommer at several times, notably on Cinderella. Through the videos for the Fashion Freak Show, the visual arts expert wanted to plunge the audience into the singular world of Jean Paul Gaultier: “I created images to color what is happening on stage, and also to act as an invitation to reverie, which is fundamental. I try not to overwork perception, everybody should be able to project themselves onto the performance in a different way,” underlines the designer, who switches it up between screens, LED walls and different projection methods. He was proudest of the operating table tableau during rehearsals. Why? “Because it represents the very beginning, it was the first time that Jean Paul had undertaken the act of creation and it was a moment that would determine the rest of his journey. To be honest, it’s my favorite scene, I’m delighted with it.